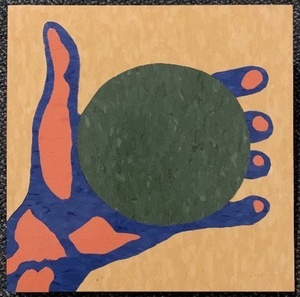 For those who attended Arcana’s 2014 presentation of the artwork and inventions of reclusive outsider artist / folk engineer “eb, The Jersey Genius”, to say that it was a memorable event would be an understatement. Cited by an outreach member from the National Gallery of Scotland as “the best art exhibit he saw in Los Angeles” that year, the exhibition was filled with amazing folk art sculptures, wonderful inventions, and live demonstrations that explained exactly how eb believed the Egyptian pyramids were built. The highlight of the event was witnessing eb’s invention, The Boonsburg Egg, being used by a single person to easily roll one ton of bricks up an incline. For those who missed it, we offer this link to our original promo material, and this video of The Boonsburg Egg in action.

Arcana is honored that eb has given us the opportunity to offer tiles from his “Mother’s Kitchen Floor Collection.” Consisting of one dozen hand cut tiles crafted as a surprise to replace his mother’s aging kitchen floor, each VCT tile is a 12 x 12”, one of a kind piece of art depicting eb’s hand holding a disk shaped in the form of his invention mounted on board. The Boonsburg Egg, (which he believes not only explains how they built the pyramids of Egypt, but also Stonehenge, Coral Castle, and Easter Island.) On the reverse of the tiles eb has hand written excerpts from his theories, many of which challenge the teachings of modern day Egyptology.

Knowing that he rarely, if ever, parts with any of his creations, upon learning that these colorful tiles were just collecting dust in his workshop after his mother barred him from pulling up her old floor, we suggested allowing Arcana to offer a sampling of these to our customers. Amazingly, eb agreed, but under one condition – that in any announcement we made regarding his work, we would promise to include a few of his theories. With that, here are just two of the many amazing breakthroughs contained on the backs of these tiles:

#1 – King Tut’s headdress is not depicting a religious relic made of fine fabric and gold like experts claim - instead it is just a golden imitation of a function specific sun-blocking hat worn by Egyptian workers of the day, and is easily made using a single bent fan palm leaf.

#2 – Having discovered that the Ancient Egyptian’s used the same surveying tools that we still use today (including glass lenses, transits, water levels and tripods – all of which eb has found depicted on the hieroglyphs), eb rationalized that the ancient Egyptian surveyors might have also used the same hand signals to communicate over long distances as well. Below eb compares modern surveying hand signals with the unexplained stilted posturing found everywhere in ancient Egyptian art.

Besides being presented on the backs of the tiles, these theories, along with many others, are also included in eb’s hand-assembled “Nobel Prize Application” pamphlet, which goes even deeper into his groundbreaking findings. All twelve tiles from eb’s “Mother’s Kitchen Floor Collection” will be on display – and for sale - at Arcana from April 3rd through May 2nd, 2021. The tiles are priced at $112.35 each, and the “Nobel Prize Application” pamphlets $5.00 while supplies last.

We believe that it is a only matter of time until eb’s genius is finally recognized!