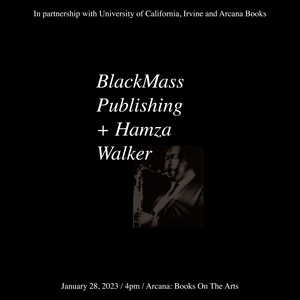 We are excited to announce an in person discussion between LAXART's director Hamza Walker and Yusuf Hassan and Kwamé Sorrell of BlackMass Publishing. This Saturday, January 28th, 4pm. Founded by Yusuf Hassan in 2019, BlackMass Publishing is a New York-based collective and independent press. At once a structure of coherent units and a collection of disjointed parts, BlackMass invokes an aggregate of Blackness, of matter in resistance. Combining archival photographs and found print material with poetry and jazz music, BlackMass grapples with the blurred lines and idiosyncrasies which make up the collective improvisation of African diasporic culture. BlackMass have publications included in the permanent book collections of the Schomburg Center for Research in Black Culture, New York, RAW Material Company, Dakar, Center for Book Arts, New York, The Thomas J. Watson Library, New York, The Whitney Museum Library, New York, The Houghton Library, Cambridge, The Langston Hughes Community Library and Cultural Center, New York, The New York Public Library, and The Evergreen State College, Washington. Their discussion will be held at Arcana Books in Culver City on January 28th at 4pm. We look forward to seeing you there!