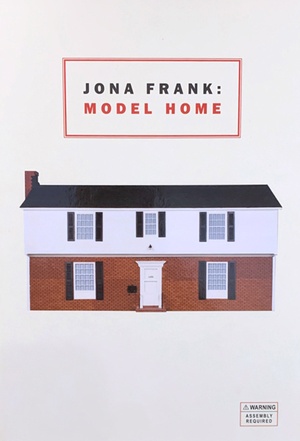 ● Purchase ● Jona Frank: Model Home, organized by the Bowdoin College Museum of Art, builds on artist Jona Frank’s Cherry Hill project, launched in its first phase through Cherry Hill: A Childhood Reimagined (New York: Monacelli Press, 2020). Frank, a noted photographer, is known for her sensitive exploration of young people beginning to discover themselves and to assert their own sense of identity, as evidenced by projects such as such as The Modern Kids (2015), Right (2008), and High School (2004). In Cherry Hill: Model Home, Frank turns her lens on the world of her own upbringing. But Frank’s self-investigation, does not directly picture the photographer, but instead uses surrogates, prompting further interrogation of just what it means to “perform” the self. Actor Laura Dern stands in for Frank’s mother, Rose, while a sequence of younger actors—who we watch mature in this narrative—represent the budding photographer.
In this assemblage of unsettling “Kodak moments,” pictures brandish moments of aggressive suburban pride: an expectant young mother places her hand over her abdomen with a knowing smile; mother and daughter in matching outfits show off “picture-perfect” pies. Other images, however, undermine this conceit: an overturned cereal display betrays the same daugher’s humiliation in the face of creating an unintended disruption at the supermarket. With humor and candor Frank pictures the moments that punctuate her memory and that shaped her as an individual. Observing the monumental in everyday experience, Frank, in exploring her own memories weaves a narrative that will resonate poignantly with broad audiences. In so doing Jona Frank: Model Home casts a picture of American Suburbia in the post-space age era that casts a critical light on the domestic fantasies that not only enchanted but also entrapped their adherents.