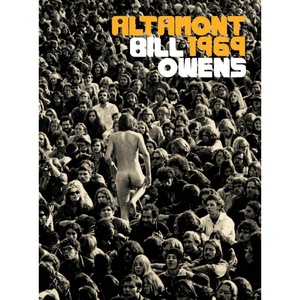 PLEASE JOIN US THIS SATURDAY, JUNE 29th, 4:00 - 6:00 PM
FOR A BOOK SIGNING WITH LEGENDARY PHOTOGRAPHER
BILL OWENS TO CELEBRATE "ALTAMONT 1969"
Please welcome our longtime friend, distilling mogul and renowned photographer Bill Owens for some afternoon revelry and drinks to coincide with his brand new book documenting the Rolling Stones' Altamont Free Festival held in Northern California fifty years ago! In addition to copies of "Altamont 1969", there will be a limited supply of his out of print titles "Bill Owens", "Working", "Leisure", and the iconic "Suburbia". If you cannot attend but wish to purchase any or all of these, place your online order here, or call us at 310-458-1499.
“Bill Owens: Altamont 1969” presents a new and previously unpublished series of photographs of The Rolling Stones’ infamous concert at the Altamont Speedway in Northern California. The Altamont Free Festival has become an emblem of the upheavals and aftershocks of a decade of change, and where Owens captured a generation’s desire to stand up and raise its voices against the war in Vietnam, against segregation and racial discrimination, against authority in general. Owens was hired by the Associated Press to cover what promised to be a huge rock concert whose lineup featured the Stones, Jefferson Airplane, The Grateful Dead, Santana, The Flying Burrito Brothers, and Crosby, Stills, Nash & Young. But when he arrived at the Speedway with “two Nikons, three lenses, thirteen rolls of film, a sandwich and a jar of water,” the photographer witnessed one of the defining moments of the late sixties. The Utopian hopes and innocent conviviality of the 1960s gave way to tension and a deadly violence; as the Stones continued to play and much of the crowd remained oblivious, an eighteen year-old African-American boy named Meredith Hunter was killed by the Hell’s Angels who had been hired as concert security. This book captures the era's agitated energy that manifested itself in slogans and billboards, sit-ins and demonstrations, and a concert that was treated as a collective rite.
UPCOMING EVENTS AT ARCANA
THIS SATURDAY, JUNE 29TH, 4:00 - 6:00 PM
BILL OWENS: ALTAMONT 1969
BOOK SIGNING
SATURDAY, JULY 13th, 4:00 - 6:00 PM
SOVO// MAGAZINE: ISSUE 5
LAUNCH PARTY + SIGNING
SATURDAY, JULY 27th, 4:00 - 6:00 PM
STEVE BANKS: NITRO
BOOK SIGNING
SATURDAY, AUGUST 3rd, 4:00 - 6:00 PM
GARY CANNONE: ALBUMS BY CONCEPTUAL ARTISTS
EXHIBITION RECEPTION AND BOOK SIGNING
SATURDAY, SEPTEMBER 7th, 4:00 - 6:00 PM
STEVEN REA: THE HOLLYWOOD BOOK CLUB
BOOK SIGNING
SUNDAY, OCTOBER 6th, 4:00 - 6:00 PM
ZANDRA RHODES: FIFTY YEARS OF FABULOUS
BOOK SIGNING
SATURDAY, OCTOBER 26th, 4:00 - 6:00 PM
NINA FREUDENBERGER + SHADE DEGGES: BIBLIOSTYLE
BOOK SIGNING
SATURDAY, DECEMBER 7th, 4:00 - 6:00 PM
TODD HIDO: HOUSE HUNTING (REDUX)
BOOK SIGNING