Tuesday-Sunday, 11:00 AM - 7:00 PM
*
Face Coverings are required for those without Covid-19 vaccinations (honor system).
*
Only a very small portion (about 2%) of our stock is listed here. If there are titles you are searching for beyond those you find on our website, please email or call us about them. We will gladly search our extensive stock of as-yet-uncatalogued material to help locate the items you seek. 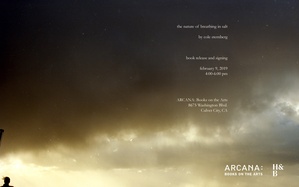 Book Launch & Signing at Arcana > Cole Sternberg: The Nature Of Breathing In Salt

PLEASE JOIN US SATURDAY, FEBRUARY 9TH,
4:00 - 6:00 PM FOR A LAUNCH PARTY
AND BOOK SIGNING FOR COLE STERNBERG:
THE NATURE OF BREATHING IN SALT

"In Western Japan, a bottle of champagne is smashed against the hull of a massive bulk cargo vessel, its path charted along the arch of the northern hemisphere: We follow its gentle glide through the lilac calm of the Japanese outer islands; a waive at the lights of Busan, the South Korean city along its charted path; the frigidity of the Aleutian Islands; a circular motion to avoid a mid-ocean monster; and lastly a cruise into Portland past the forests and factories on the Columbia River. On this maiden voyage across the Pacific, the vessel’s holds sit empty. One is in ballast to strengthen against heavy storms. A crew of twenty, plus four creative wanderers—including artist Cole Sternberg, who wrangled the quartet especially for this journey—anxiously steady themselves for weeks under swaying ground. It is within the context of this floating island that the work comprised of “The Nature of Breathing in Salt” emerges.

We find rainbows confronted by fluorescent hallways, black clouds fighting the setting sun, Sternberg’s paintings dragged in the sea, the glory of the unknown and unwelcoming greeting of the land. The imagery shifts in a bell curve of pleasant anxiety, mirrored by a narrative of Melville, Sternberg’s poetry and the dialogue of the crew. It is an experience that leaves one yearning for and sick of the sea. It is an art object more than just a book.

Sternberg’s practice of using the environment to tell its own story is apparent here. His practice ultimately results in the paintings and photography featured throughout this book. Works from this body of imagery have been exhibited extensively, and are in the permanent collections of the Los Angeles County Museum of Art and the Pérez Art Museum Miami, and the El Segundo Museum of Art, among others".

"Cole Sternberg was born in Richmond, Virginia. He lives and works in Los Angeles and practices in a range of formats, including painting, installation, video, and writing. Series of his work have focused on a variety of social issues, from current human rights activism and its relationship to the law, to the environment, to the media, and concepts of content overload. The works tend to be subtle or subversive in nature, driven by elegant visual concepts and poetry.

So come join us along with our pals from esteemed local publishing concern Hat & Beard on Saturday, February 9th between 4:00 and 6:00 PM to celebrate the launch of Cole Sternberg's striking The Nature Of Breathing In Salt. If you are unable to attend but would like to purchase a signed or deluxe "Collector's Edition" copy, please do so via our website here, or by phone at 310-458-1499.